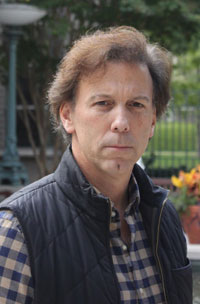 A.G. Harmon’s fiction, essays, and reviews have appeared in Triquarterly, the Antioch Review, Shenandoah, the Bellingham Review, St. Katherine Review, Image, and Commonweal, among others. His fiction won the 2001 Peter Taylor Prize (A House All Stilled, University of Tennessee Press, 2002) and was the runner-up for the 2007 William Faulkner Prize for the Novel. His academic work, Eternal Bonds, True Contracts: Law and Nature in Shakespeare’s Problem Plays was published by SUNY Press. He was a 2003 Walter Dakin fellow at the Sewanee Writers’ Conference. He grew up on horse-and-cattle farms in Mississippi and Tennessee. Currently, he teaches at The Catholic University of America in Washington, DC.